Hari Seldon had the right idea

For those not in the know, Hari Seldon is a main character in Asimov's "Foundation" series.  Essentially, he foresaw the collapse of a galactic civilization, and took steps to shorten the interregnum to the next civilization that would arise after the dark ages.

Conventional wisdom is that we aren't voting our way out of the current crisis, and I happen to agree.  Those don't tend to think too deeply take that statement to mean that I think it's time to start shooting.  Nothing could be further from the truth.  Someone (maybe Tam, or Uncle or the Pantsless One-I can't recall) pointed out that shooting our way out will inevitably end with people having to line a subset of  their friends, neighbors and family against the wall.  I am not, and probably never will be, prepared to do that.  Calling for a violent solution to our troubles without explicitly acknowledging this reality is foolhardy at best.

I am convinced that the republic will fall in the next 100 years.  If the election of Barack Obama was a one off, if so many crucial institutions had not been infect with overt and covert statist/collectivist influences, if we had not devoted so much energy to dismantling our own liberties, then perhaps she could be saved.  The fact that after 4 years of abject failure, scandal, state facilitated murder, deliberate over-reach and blatant unconstitutional acts, Obama is looking at possibly being reelected and not jail time tells me we're done.  That anyone could consider voting for him to get a second term, let alone a number near enough to have the election in doubt, means we're nearing the end.

So, what do we do about it.  Voting isn't going to work.  Shooting isn't an option.  There's no where else to go, so leaving isn't an option.  All that is left, I fear, is planting seeds that you know will lie dormant for generations in the hope that the tree of liberty will sprout and flower again.  If that's all that is left to us, then how to set about doing it?
Posted by Oliver Perry at 2:22 PM 1 comment:

Life in meatspace has seriously cramped my blogging.  I've posted a few things over at Huffpo, stopping to laugh at new BC head Dan Gross.  Considering that he makes Helmke seem erudite, I think we are doing well on that front.

The Martin/Zimmerman tragedy:  Briefly, when the story first broke, based on the reportage, I was convinced that Zimmerman stalked and murdered Martin.  Seeing that every piece of reporting was slanted to specifically elicit that reaction without regard to what actually happened, I have revised my stance.  Almost without fail, every story deliberately omitted exculpatory facts, doctored video and selectively edited audio.  Until conclusive evidence to the contrary is presented, my take is that Martin doubled back, jumped and attempted to kill Zimmerman by pounding his head against the sidewalk.  Bob Owens (formerly of Confederate Yankee) has had excellent coverage, with too many posts to link to.  I am fervently hoping that we can avoid a race war, and a small part of me cynically believes that perhaps Obama thinks a race war might help him hold onto power.

A bunch of Joyce foundation shills got into a debate online regarding open carrying of firearms.  Look at the up and down vote totals for a sense of what grassroots really are.  Of course, at one point the CSGV had linked to the debate page since their director is one of the shills.  Since we drank their milkshake, all mention of it has dropped.

Fast and Furious, a scandal resulting more than 300 dead based on the DOJ misguided attempt to pad gun recovery statistics, is still creeping along.  The most transparent and ethical administration, evah, has steadfastly refused to comply with congressional subpoenas demanding details.  Looking forward to seeing Holder in "pound me in the ass" prison, but we shall see.

On that note, I'd like to extend my best wishes to Mike Vanderboegh at Sipsey Street Irregulars.  He's had some rough times recently with some health related issues, but without him and David Codrea we'd never have heard of this.  Finally, there is work afoot to make a documentary of this travesty, and that takes money. Head over here to see the details, and help out if you can.
Posted by Oliver Perry at 2:00 PM 1 comment:

For the last two days, Ladd Everitt, as well as about half a dozen fellow travelers have been spamming the hell out of the Starbucks facebook page.  Unsurprisingly, each of their posts draws resonses form 20-30 different individuals, as well as even more people simply dropping by to encourage the coffee giant to stick to selling coffee and not trampling peoples basic rights.  Ladd has been getting more and more strident, and occasionally when someone in reply says something mean he grabs a screencap and either posts it on the CSGV FB page or he tweets it.

He just posted his cell number.  On the Starbucks FB page. 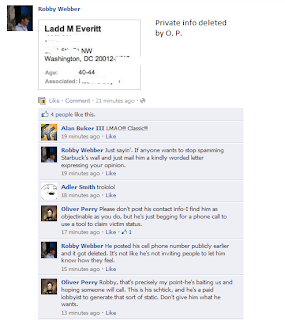 I've been wondering why the CSGV bigwig would be punching down for such a long time, and this is the only thing that makes sense.  Given their propensity for taking anyone trolling to be an activist (check their note on Abby Spangler-sumdood named "steamingpoopfart" left a nasty comment to Abby and he's now a gun rights activist.)

I have no doubt that in the event that no one obliges him, he'll have an intern call and say mean things. 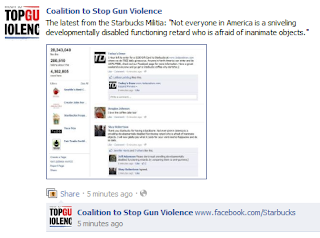 Keep this in mind

HR822, the national concealed carry reciprocity bill has passed the house and will possibly get a senate vote this year.  If this happens you can count on all manner of lies, obfuscation and general pants shitting hysteria.

It's almost assured that a hit piece written by Michael Luo for the NYT will be cited incessantly.  It goes without saying the "article" is fraught with falsehoods, but fear not.

Remember this post when this comes up for debate.
Posted by Oliver Perry at 2:19 PM 2 comments:

Advocates for gun control will frequently scoff at the notion that they support widespread citizen disarmament.  "Heller took that off the table" or some variant is what they say.  The Coalition to Stop Gun Violence has posted another screed demonizing gun owners, highlighting the following quote from one of their true believers:

"A "parent" who sees no problem with possession and use of a weapon is bad enough."

Being a parent and in possession of weapons while possessing the will to use them, should the need arise, is a bad thing.  Bad enough, apparently, to move you from parent to "parent".  Leaving aside for a moment how twisted it is to view the responsible exercise of a basic human right as bad, how can you hold this view of firearms ownership, be fired up enough to blog/comment/tour/speak/fund-raise and NOT advocate for total disarmament?  The fact is that you cannot.  Anyone that feels this way about firearms must, as a matter of consistency, be working toward their removal from society.

And who is this "Pastoral Counselor" that CSGV quotes?  None other than Craig Hexham.  Yes, it's one of the folks from that I pointed to in my opening post detailing why I blog anonymously.    We should also point out that Hexham thinks that dealing with people lawfully selling their firearms via private sales should be dealt with much more harshly than people viewing "pictures of 16 year old girls on the internet" should be .

For the record, while I appreciate the frustration of the father in the video linked above, I do not think that I would respond in the same fashion to one of my children behaving badly.  But, it's his kid-it's his decision.
Posted by Oliver Perry at 1:59 PM No comments:

Brian Doherty, from Cato, being linked on Huffpo.  By Huffpo.
Posted by Oliver Perry at 3:12 PM No comments:

Email ThisBlogThis!Share to TwitterShare to FacebookShare to Pinterest
Labels: Winning

PEG linked to this post, hie hence and express yourself. Make certain to include the fact that it was PEG that alerted you to the story.
Posted by Oliver Perry at 8:28 PM 1 comment: